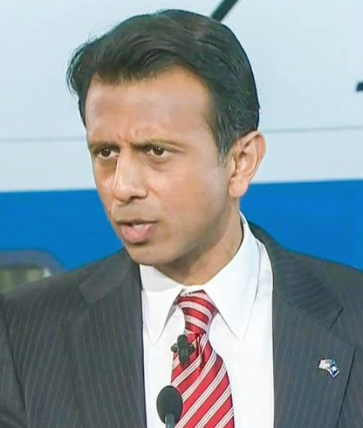 From the Not-So-Happy Hour Debate: Jindal shined brightest on a stage that left most people saying, “Who are these guys again?” He scored right off the bat by saying Trump is no conservative, or Republican, and we all need to stop pretending he is. He scored again while correcting Tapper on his stance on immigration with, “immigration without assimilation is invasion.”  He got the best response when, during the Kim Davis question, he said he wanted the left to give us a list of approved jobs for Christians.  One of the best lines of the night belonged to Jindal, on the Iran deal:  “This is a bad deal. He’s declared war on trans fats and a ceasefire with the largest state-sanctioned sponsor of terrorism.”

Pataki said that he would not deport anyone, instead he would demand every illegal do community service in exchange for citizenship.  Maybe it’s just me, but that sounds an awful lot like slavery’s first cousin, indentured servitude.

Lindsey Graham did his best John “I served in Vietnam” Kerry impression by reminding everyone that he spent 33 years in the Air Force every 5 minutes.  He was a one hit wonder, by bringing almost every answer back around to the Middle East.  The only time he broke from his incessant “but the Middle East!” theme was during a back and forth with Santorum on an immigration question.  There is a reason Rush Limbaugh nicknamed Lindsey “Grahamnesty”.  As far as he’s concerned it’s just impossible to deport 11 million, so we shouldn’t event try. He proceeded to interrupt Santorum by just spouting out random words that may or may not have had anything to do with the question.  Ugh.  When he got his turn (Santorum stayed quiet & let him speak), he somehow turned the question right back around to the Middle East. Not. Kidding.

Santorum, a former congressman, thinks that what we all should know him for is his prolific ability to reproduce.  He is especially proud of his special needs daughter who is the “heart and core of my heart.”  After that stumble, Santorum was most notable for his Herman Cain impression.  Apparently “20-20” is the new “9-9-9.” Santorum also said he’d raise the minimum wage because only less than 1% of people are stuck on it, and we need to because #caring.  Problem is, he’s wrong. At least 2.6% of Americans are working minimum wage jobs, the majority of whom are young people, the type who do not need a “living wage”, just the experience those jobs provide.

From the Main Stage: Fiorina crushed it.  Chica dropped all the mics. Every time she had a chance to speak, she nailed it.  One of the audience favorites was her response to the stupid, “which woman would you want on the 10 dollar bill?” She said no one, she wouldn’t change the $10 because that’s nothing but an empty gesture. She continued by pointing out that women are not a special interest group, but the majority.

Trump opened by insulting Rand Paul, and just kept up with the insults all night long. He continue to avoid specifics. Honestly people, we’ve already elected someone who speaks in broad generalities and sold empty platitudes.  Look where that got us.  The vine video of the Donald making all the emoji faces in 7 seconds is pretty funny.

Huckabee was completely forgettable. His only shining moment was his opening joke about the GOP being the A-Team, with the Donald being our Mr. T.  Sigh.

I know Kasich was on stage, but I don’t remember a dang thing he said.

Cruz is a great guy, but he looks like a lump on the debate stage. My mother’s friend said he reminded her of Grampa Munster, and now I can’t get that picture out of my head.  You’re welcome America.

Jeb’s best moments were when he copped to smoking weed 40 years ago, and defended his brother.  Other than that, he looked like an angry little man who couldn’t decide if he wanted everyone else to just go away, or if he wanted to go home and forget all this crap.

Rand Paul played to his father’s demographic by saying he’d never get us involved in a war, and he’d totes legalize pot. He’s got the vote of the 420 crowd all sewn up – that is, if they aren’t too buzzed to remember to show up and vote on election day.  Otherwise, he is most known for being Trump’s favorite punching bag.

Chris Christie tried his best to take both Donald and Carly down a peg during the question about their business record.  “No one cares about your career!” he whined.  Carly effectively shut him down when she pointed out that he & the other politicians on stage had just spent the last hour & a half talking about their records, and bragging about all the stuff they’ve done in their careers.  Since neither she, nor Donald or Carson, have a political voting record, their career is their record, and speaks to their leadership skills.  Like I said, Carly dropped all the mics.

Carson did ok.  His slow delivery is probably great when dealing with patients and families in his pediatric neurosurgery practice. Honestly, I’d be really comfortable with him as my kid’s doctor.  It just doesn’t translate well into politics.

Walker was there, somewhere.  His best line of the night came early in the debate during a back and forth with Trump.  “Just because Trump says it,doesn’t mean it’s true.” Lulz.

Rubio did a decent job.  His foreign policy answers were spot on.  His answer to Trump’s criticism of politicians who speak Spanish on the campaign trail was brilliant.

“I do give interviews in Spanish, and here’s why — because I believe that free enterprise and limited government is the best way to help people who are trying to achieve upward mobility.

And if they get their news in Spanish, I want them to hear that directly from me. Not from a translator at Univision.”

Yes people. You can argue all day for people to learn English, and I’ll agree with you.  But there is something to be said for reaching people in their native tongue.