This year’s election started off looking brilliant.  The GOP had such a deep bench of candidates that would have been amazing.  Then the Trump Train idiots just shat the bed.  I promised in my last post that I would change party affiliation if Donald was awarded the GOP nomination.  Unlike Alec Baldwin and so many others, I keep my promises.  Here’s the evidence: 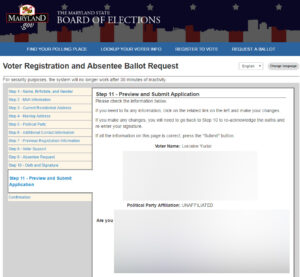 I am now officially “Unaffiliated.”  I stand by my choice to refuse to vote for Donald Trump.  He represents everything I am against.  He is a conman who is only looking out for himself.  I’ve said the very beginning that his campaign was never supposed to be more than a pr stunt for his TV show.  Then the Social Justice Warrior crowd went at him over his “build a wall!” comments and got him fired from his show.  At that point, the Donald can not just sit back and allow himself to be humiliated, so he kicked the rhetoric into high gear.  Media, even conservative media, loved him because he was so bombastic, he was great for ratings and clicks.  Those of us who are #NeverTrump warned that he was not a good candidate.  Several of us begged for us to coalesce behind either Rubio or Cruz.  The longer the primary dragged on, the more clear it was that Cruz had the best chance.  But it was too late. 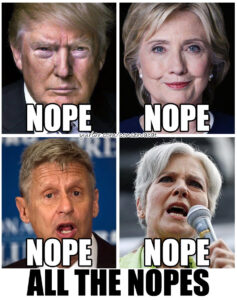 I wanted to jump to the Libertarians.  I like the Libertarian platform in many respects.  I generally disagree with them on the view of pot & foreign policy, but it wasn’t anything I couldn’t work with.  Then the Libertarians shat their bed by picking Democrat-lite Gary Johnson.  Pro-abortion, anti-religious freedom…  I just can’t.

So for the first time in my 21 years of voting — I will not be voting for the office of President.  I will go vote for the down-ticket races.  But I can not in good conscience select any of the choices we have for President this year. Hillary is a proven liar with a long record of corruption.  Trump is a con man, who has already changed his mind about everything he’s promised so far.  Johnson is the least Libertarian Libertarian I’ve ever seen.  As for Jill Stein, her platform is just the worst for our already struggling economy.  If a good candidate would mount a decent write-in campaign between now and November, maybe I’ll throw a vote their direction, but that’s not likely to happen.

I urge everyone to research their local candidates.  In Maryland, you can see who will be on your ballot on the State Election Board Website.  I will be supporting Kathy Szeliga for Senate and Mark Arness for the House of Representatives. I still have to research on my local county officials and judges.