In the Happy-hour debate:  Everyone will lament Gov. Perry’s recent drop from the race, while secretly thanking their lucky stars he’s gone.  Then they will all take shots at Trump. Lindsay Graham, the human sponge, will try not to leave any puddles on the floor while he proves to be the squishiest of squishes.  Santorum will get the inevitable Kim Davis/Same-Sex marriage question, which he will attempt to answer in a way that defends the Christian faith without offending too many voters, all of which will be completely overshadowed by the giant stick he’s got rammed up his backside (all puns intended). Pataki will fail to do or say anything that will get him remembered by anyone, and Jindal will throw everything he has at Trump in a bid to get noticed. 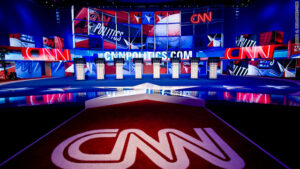 On the main stage:  Trump will monopolize the conversation, and say something so incredibly pig-headed and stupid that those who already dislike will cheer, thinking this is the moment the plebs see him for who he is. They will be wrong.  Rand Paul will launch more salvos at Trump and the two will get into a pissing contest right there on the stage. Chris Christie will join in, because this stage is only big enough for one huge ego from the NY/NJ area, thank you very much. Besides, being the big, straight-talking, angry guy with the awesome accent is his gig, and dammed if he will let Trump run away with this!  Marco Rubio will make some great points, and drop a few pop-culture references.  Ted Cruz will recall to mind legislation he worked on for every question asked, but will come off as whiny and soft.  Scott Walker will couch his brilliant answers in so much political double speak, no one will remember he was even there com tomorrow morning.   Dr. Ben Carson is just smart enough to say very little, except for the occasional “D.C. needs a lobotomy” joke.  Carly Fiorina will drop truth bombs every time she’s given the mic to talk, which won’t be all that often.  CNN can’t let her existence change the narrative that the GOP is a good ol’ boys club, so they will do all they can to ignore her.  Huckabee will be that awkward friend that hangs onto the edge of the crowd but doesn’t say much.  He will also get all the Kim Davis/Same-Sex marriage questions, in an attempt by CNN to beclown the entire Christian faith.  He will answer appropriately, and promptly drop out of the race next week.  Jeb Bush will stand there seething, wishing everyone would just get off the stage and let him have this already.

Projected Winner:  Carly Fiorina – provided she actually gets some speaking time.  Marco Rubio will score some nice hits.  However, Trump fans will all roundly declare him to be the winner, and call everyone who disagrees a “cuckservative”.