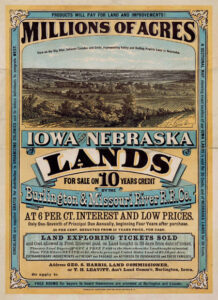 The Homestead Act of 1862, signed by Abraham Lincoln, gave anyone, 21 years old or older, who had never taken up arms against the government, 160 acres of land in the West.  The only catch – you had to live on the land for 5 years, and make improvements.  Because the law said “anyone” it meant that women and African-Americans could be homesteaders.  As a result, after the civil war, freed slaves made their way west in drove.  In Kansas, towns populated entirely of freed slaves sprung up.  The freedom, and the feeling of a fresh start drew many.

Unfortunately, only about 40% of those who tried, were successful.  There are were many hardships that faced the homesteaders, everything from Indian attacks, to claim jumpers, to harsh winters, to droughts.  Most of the people who took claims, were too poor to afford to do much with their claims.  Some were killed by claim jumpers, others by Indians, and others by disease.  But many more just simply gave up and left to try to make their way elsewhere.

**** A side note to any who many be reading the Laura Ingalls Wilder books:  Pa Ingalls got his homestead under the Timber Culture Act of 1873, which was one of the acts that modified the 1862 act.  Under this act, the homesteader got 160 acres, but they had to plant 40 acres of trees within a set time frame.  Someone who had already gotten 160 acres under the 1862 could make another claim under this act, giving them a total of 320 acres.  The Ingalls did not get a homestead claim until 1880, thus they only got the 160 acres under the Timber Culture Act.

Then a kid who goes by Jack made a Lego Version:

*** As an interesting side note, the Morrill Land-Grant Act of 1862 which gave states land to sell to fund agricultural colleges, led to the formation of Cornell University, the alma mater of my 2nd cousin 3x removed, Professor Earle Volcart “Hardy” Hardenburg.  “Hardy” was a well respected expert on potatoes, earning his doctorate in 1919, and serving on many agricultural boards as well as speaking across the United States and Canada.

** FYI – This is what Laura Ingalls Wilder wrote about in her book On the Banks of Plum Creek.  When she writes about the swarm of grasshoppers, it was really an insect called the Rocky Mountain Locust.  These things were a pest to the settlers for several years, but the worst was the years of 1874-1875.  Eventually, the Rocky Mountain Locust went extinct, with the last documented sighting in 1902.

Here’s a video about it:

Death of the Super Hopper by Professor Jeffery Lockwood. – FYI, the good professor believes in Evolution and Global Warming, but he has several good points.