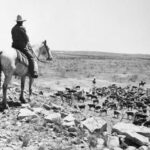 Ranchers raised cattle and other livestock, but cows were the popular choice of the late 1800’s in the West.

Cowboys were employed to help herd the cattle and keep them healthy.  They were also responsible for cattle drives – herding the cattle hundreds or even thousands of miles to the best market.

Margaret Heffernan Borland was the only woman to ever lead a cattle drive.  After the death of her 3rd husband & several of her kids, she took her remaining children (2 sons under age 15, and a 7 yr old daughter), as well as her 6 yr old granddaughter, and led the cattle drive from her ranch in Texas on the Chisholm Trail.  Unfortunately, she died in her boarding room before she could sell the cattle.

Because the cows would roam freely for most of their life, ranchers used a brand to mark their herds so they could tell which cows were whose.  For a fun activity, think up a name for a ranch, then make up a brand.

American Heartland had a video about ranchers: