We inherited a big box of glowy type stuff from Aunt Nani while we were out visiting for Aunt MomoT’s wedding. It took us a few days to clean off the years-old funtac type stuff, but we, and by we I mean me, did it.

Then we, and by we I mean me, used double stick tape to put them all over the top of the room. We also created some constellations. Yes, GeekBoy helped with this endeavor by picking out the ones he wanted me to put up. Aspiring star gazers will find Cygnus the Swan, Taurus the Bull, Orion the Hunter, Ursa Major and Ursa Minor, the Big and Little Dippers, and even Leo the Lion on the ceiling in GeekBoy’s Room. I used his book, Glow in the Dark Constellations, to create the ceiling motif. I even tried to make sure, as best I could, that things that are supposed to point toward something else kind of do. IE: Big Dipper points to Polaris in the Little Dipper, Orion’s belt points to Taurus. That kind of thing. It really fun, I learned a lot about stars, and GeekBoy loves that he can now ID several constellations on his ceiling and can’t wait for the sky to clear so we can try to find them in sky at night.

Here are the pictures. Can you find the Constellations?? Hints below. 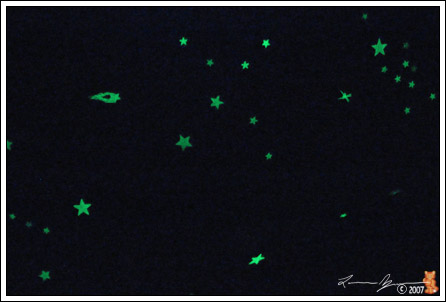 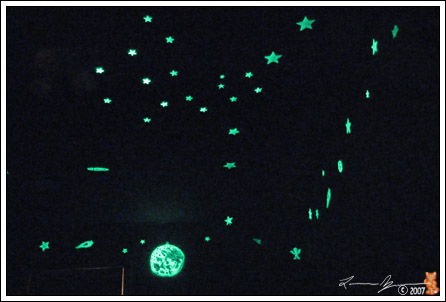 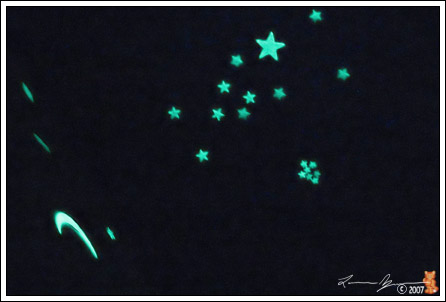 Need a hint? Scroll down.

Ready for the hints??

1. See the cross in the middle? That’s Cygnus the Swan. The center of Cygnus forms the Northern Cross. To the left you will see the signature three stars of Orion’s belt. To the right, the face and legs of Taurus.

3. That’s all Taurus the bull! the big star is part of the face, the legs cross under him, and the horns stick out over. the seven tiny stars form the Pleiades which is pretty much the butt or tail of the bull.

That’s it! Enjoy! I know GeekBoy does. Thanks Aunt Nani!