This just amazed me. I’m doing All About Spelling with my 9 year old, who was just dx’d dyslexic. Today we were going to work on writing the letter when I say the sound.  I figured we’d have fun with it, and use sidewalk chalk outside on the driveway.  But after a few letters, he started to complain that he didn’t have the right colors, or even enough colors.  “‘D’ is supposed to be red, but all we have is pink-ish red.”  I asked him if every letter had a color, and he said yes, with a “Duh Mom, don’t they all?” attitude. So I opened Photoshop and used the OpenDyslexic font. (He says it makes it a little easier to read.  It’s a font that is thicker on the bottom of the letters to help “weigh the letters down.”)  Then we colored each letter to the proper color.  This was our result. 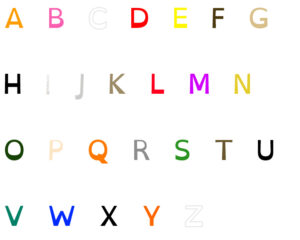 Funny thing is, some letters are the color they are for a reason.  Like “S” is snake green, and “B” is hot pink because his sister’s name starts with a “b” and that’s her color.  “I” is not really a color, but it’s glazed and sparkly like a donut.  “C” & “Z” are both white.  He says that the colors are not there when he reads them on the page, only when he thinks of each letter, and the lowercase versions are the same colors as their uppercase counterparts.

I thought this was just so cool.

EDIT:  I found Cassidy Curtis through a Google search.  Turns out this phenomenon has a name:  Synesthesia.

1 thought on “Read With All The Colors of the Alphabet”