Truthfully, me. I need it. I used to be the most disorganized mass of humanity on the face of the earth. Ok, maybe that’s an exaggeration, but I was in the top ten. Then I found Flylady, and things have never been the same. I became organized, semi-efficient, and my house was never 15 minutes from messy, even if I didn’t do everything Marla said. Marla gave me the gift of routines, and it has saved my home.

So naturally I would apply those routines to homeschooling. Oh, I tried. I truly did. Our first 6 months in this crazy journey were highly scheduled and incredibly… painful. The enforcer in me brought out nothing but tears and fights in my son. Poor guy, he will most likely always be our guinea pig.

So what happened? How did we go from a scheduled, classical approach to our current unschool-ish eclectic approach?

Six months after we started, December hit. December is a rough month for me. While I had only planned on a week or two break for Christmas vacation, the depression that hit me at the begining of the month made it nigh onto impossible for me to continue the daily fight school had become. I needed a break, so we took one. For the whole month.

Then January rolled in, and brought with it a house hunting trip, and preparations to PCS (Permanent Change of Station for you non-military types. With all that packing, and traveling, and whatnot,we really didn’t get a chance to do a whole lot of “school,” and that was just fine by my son.

February brought a big move. We had bought our very own house for the first time ever, and were still stuck in the old place until the end of the month. Weekends were spent dropping the kids off at Gramma & Grampa’s house so we could come down for three day weekend and do as much of the renovations as possible before the kids and the household goods got here. Plus, there was a seemingly endless set of inspections and the never ending packing and decluttering to be sure that we didn’t move boxes of crap. Again, official “school” got kicked to the back burner.

March saw us happily settled in to our new home.  Just as we were ready to settle into a groove, life threw us a curveball.  And if that wasn’t enough, we got the double whammy.  After that April and May were a blur.  We literally just clung to each other in hopes of getting through the valley and back into the light.  Forget “school”, forget anything.  As long as everyone was clothed and fed, it was good day.

But somehow, through it all, my kids flourished.  By the time I was ready to start looking at school again, I retested him, figuring I’d have to find out where he was, and fill in the gaps.  The gap was not in what he hadn’t learned yet but should have, but rather, how far ahead of where he was “supposed to be” that he actually was!  It was eye opening to me!  After a few glitches with our curriculum order, we decided, screw it!  He did so well when we weren’t using the stuff…  why should we spend the thousand or so dollars?  So we sent it all back, got our money back, and have been flying by the seat of our pants ever since.  It’s been a nerve-wrackingly awesome ride.  But the results are clear.  Whatever we have, or haven’t been doing, it’s working.

I still need some semblance of organization though.   Hence the basket system.  Work books, and whatever they might want to play around with, available at their fingertips throughout the day. 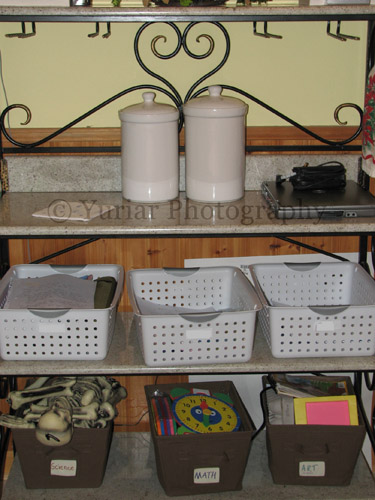 Even though we are big advocates of learning though teachable moments found everywhere and anywhere.   It does help to have a system in place for when they feel like “doing school.”

This post brought to you as part of Home Education Week at Principled Discovery. Join the fun!