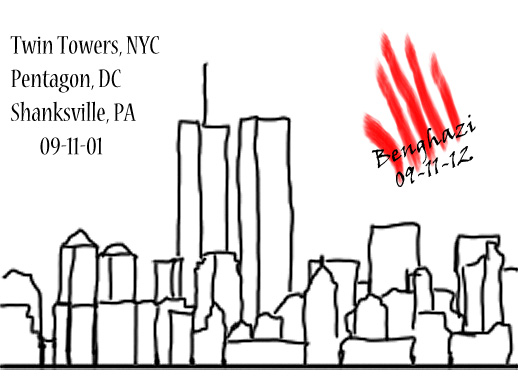 I have written often of the tale of my own personal experience on that fateful day, September 11, 2001.  Today on twitter, President GW Bush’s aide Ari Fleischer shared his remembrances of that day. Circa Storified it all, to make it easier to read through.  Do it.  Read through it, and remember why we must never forget.

And while you are remember the almost 3,000 Americans who died in 2001, pause to remember the 4 Americans who died in an attack on our embassy in Lybia just last year, on September 11, 2012.  Remember Ambassador Chris Stevens, Diplomat Sean Smith, and the two former Navy Seals who ignored orders to stand down and charged in to rescue the folks at the embassy, Tyrone Woods & Glen Doherty.  Take a minute to ask yourself, why don’t we have answers yet? Why is a videographer STILL in jail, when it has been proven that his video did NOT contribute to this?  Why has the administration stonewalled Congress’s attempts to get to the bottom of this?  And just who gave the order to muzzle the survivors?

Never forget that we are still America.  One Nation, Under God.  Indivisible.  And that we are a nation that strives for Justice for All.